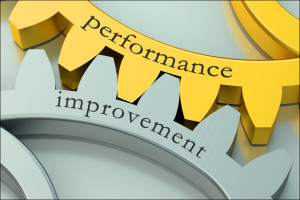 In today’s competitive marketplace, manufacturers are looking for ways to improve efficiency and wring costs out of the production process. By adopting lean manufacturing concepts, companies can eliminate waste and operate more efficiently. One way to do this is to implement kanban, a Japanese inventory scheduling system that promotes just-in-time production by delivering parts on an as-needed basis.

In a kanban system, the production process is seen as a “chain,” where each “process” becomes the supplier for the next (“downstream”) process in the sequence and a customer to the previous (“upstream”) process. This approach extends all the way to a company’s external suppliers and customers. It optimizes production flow and minimizes inventory levels by directing the supply of parts and components to workers exactly when and where they need them.

The advantages of using a kanban system include:

Kanban originated in Japan in the mid-20th century by Toyota looking to increase the efficiency of its factories. Its engineers were inspired by the inventory replenishment process used by supermarkets. They observed that customers purchase only the items and quantities they need, and store employees restock their shelves with only as much product as they expect to sell. This began an important distinction between a “push” system of manufacturing and a demand-based or “pull” system. 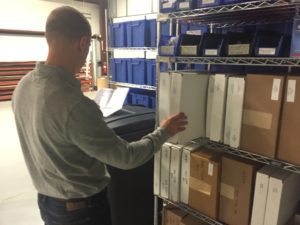 With traditional push manufacturing systems, companies produce what they think their customers will order and make items to stock in batches. While there are economies of scale, the downside is that inventory costs are high and companies can end up overproducing if sales forecasts are incorrect. Excess inventory ties up working capital, increases storage costs and exposes the company to the risk of parts becoming obsolete.

A pull strategy, on the other hand, ties production directly to actual customer demand so there is little risk of overproduction and little excess inventory. Tasks in the production process are completed when requested by the next process down the line so parts or components are “pulled” into production only when needed. With a pull system of inventory management, a company may find itself slow to respond to a sudden increase in demand but very little capital is tied up in excess parts and storage. 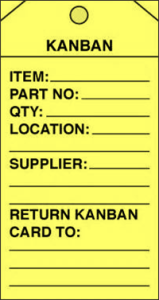 In order to facilitate its just-in-time manufacturing system, Toyota instituted a method using cards in its factories called “kanban” (a Japanese word combining “kan” for card and “ban” for signal). The cards, called “kanbans,” contain information about how to replenish each component used in production. By moving a kanban, an employee can signal when more parts are needed by an upstream process, prompting the production or purchase of these additional parts. Each kanban conveys all information required to replace the item such as the part name, number and description as well as the quantity to be produced and any other information about how the replenishment should take place. When delivering a kanban, the employee will write the date the order is initiated or “dropped” and when the parts are needed. The card is placed in a kanban rack to be retrieved along with the container by the appropriate person in the upstream process. Once replenished, the bin containing the new parts and kanban card are returned to their original location.

The following principles are fundamental to a kanban system:

The success of kanban as an inventory control system depends on its execution.  Adopting this system requires well-defined, documented procedures and training so employees are clear about every step, because a disruption in the process may lead to out-of-stocks and delays in filling customer orders. If executed properly, this is an excellent tool used to facilitate just-in-time manufacturing by eliminating waste and inefficiency from the production process.